Time To Put My Hand In The Depot's Machine!

Tech's new quote in Back In Dream Street before Buddy says Ahhh!

Magic Time Buddy is the main protagonist. He is voiced by Charlotte Bellamy Anna Wiliamson. And Daisy Do-Right's best friend. He's a yellow breakdown truck who comes with various attachments to help his friends when they are in trouble. In Back In Dream Street, He is now Blue. In the episode Building Block Blunder Jack tied Hot Air to a lamp post buddy pulled so hard that the rope snapped causing Buddy and Hot Air becoming stuck under a pile of Building Blocks He has a red B on his sides and nose. He is one of the male characters who are voiced by a female. Although Buddy's favourite colour is yellow, His favourite is also Blue just like Hot Rodney as mentioned in the reboot Back In Dream Street 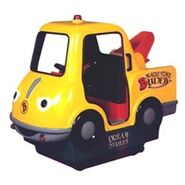 Daisy giving Buddy a kiss
Add a photo to this gallery

Using magic to help his friends

Retrieved from "https://dream-street.fandom.com/wiki/Buddy?oldid=5451"
Community content is available under CC-BY-SA unless otherwise noted.